Learn to write apps for the iOS platform using Apple's Swift programming language. iOS and Swift skills are in great demand. In this two-day course you will learn how to develop native iOS apps in Swift, culminating with how to deploy your apps for testing and to the App Store.

In this workshop you will work with Xcode, programming in the Swift language. The course interweaves iOS and Swift topics to reinforce how your code and interface work together. We will also cover key development tools like Interface Builder and Swift Playgrounds.

Some material to be covered in this workshop:

This is a hands on workshop. Even if you don't have any experience with iOS or Swift, you will be able to dive in immediately and begin creating native iOS apps that can be deployed to devices and run in the simulator. 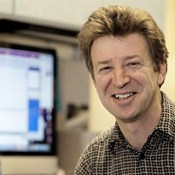 Randy Scovil teaches Computer Science at Cuesta College and Cal Poly in San Luis Obispo, CA. He has taught more than 5,000 people to program over a nearly 20-year teach career, including iOS and Android courses for over five years. He is an active developer through his development corporation Yes We Do Apps, and is the founder of the San Luis Obispo chapter of CocoaHeads. He holds a Master’s Degree in Computer Science from Cal Poly and a Bachelor’s in Telecommunication and Film from San Diego State University.