Rock Your Code and Applications with dotNetDave

This workshop will guide any level of programmer to greater productivity by providing the information needed to write consistent, maintainable, rock solid code.

Along the way of this workshop we will be reviewing code submitted by attendees to go over the good and possible issues. By the end of this workshop you will be on your way to writing rock solid code that will impress your boss and users. 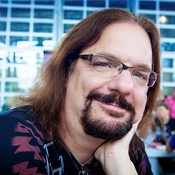 David McCarter is a Microsoft MVP (Most Valuable Professional), C# Corner MVP, solutions architect, speaker, consultant, professional code reviewer and interviewer in San Diego, California. He is the editor-in-chief of dotNetTips.com... a web site dedicated to helping software engineers in all aspects of programming since 1994. David has written for programming magazines and has published many books including "David McCarter's .NET Coding Standards" available at: http://bit.ly/dotnetdavestore. He is one of the founders and directors of the San Diego .NET Developers Group (www.sddotnetdg.org) for 20 years. In 2008 David won the INETA Community Excellence Award for his involvement in the .NET community. Daivd is a featured writer and MVP on C# Corner. David is also an inventor of a software printing system that was approved by the US Patient Office in May 2008. His Microsoft MVP profile is located at: http://bit.ly/davidmvp